Post 104 ~ Where in the World is the Accidental Chef? 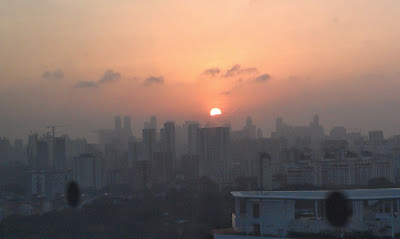 Did you think I fell off the face of the earth? Well, I haven't fallen off, but I am on the other side of it! After publishing Post #103 (well, not immediately after publishing, but pretty darn close), I hit some rather significant moments in my life. Let me catch you up in bullet form, and then I promise we'll get to the good food part!


So there you have it! Life in a fast-paced "Asian Tiger" city is a whole new world. To learn more about my time in Singapore, see my Singapore blog (linked above).

One of the biggest things to adjust to in Singapore:

There is no Wegmans.

That, my friends, is the sad, sad truth. Don't get me wrong - there's lots of other great grocery stores here, but none of them are Wegmans.

In addition, living in an equatorial island nation means that everything - everything - is imported. Jam comes from France. Cream from Germany. Veggies from Malaysia and Vietnam. Meat from Australia. Seafood from China. This adds up to pricey groceries. So I improvise.

To begin with, I bring an entire suitcase full of dry goods with me from the States. Things I'd miss: wild rice. Tortellini. Things that would be unbearably expensive to get here: tinned tuna and salmon. Dried fruit. Imported US cereals (a girl has to have her Golden Grahams and Lucky Charms, ya know?). Not to mention my greatest addiction: Keurig Coffee. 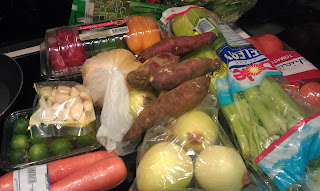 Then I place an online order through Cold Storage's amazing online grocery service and shortly after I've arrived and unpacked in my urban loft serviced apartment (generously supplied by the university I teach at) I am greeted with a delivery of groceries!

One of my favorite things to cook, as you know if you've followed my blog, is ratatouille. I have cooked it any number of ways, with varying ingredients. But it wasn't until I had dinner with a friend from North Carolina, who had also invited a friend from Japan (this sort of multi-geographical gathering is not an unusual occurrence in Singapore) did I learn how to cook this French dish in the best way possible. Here it is: the Ultimate Ratatouille Recipe: 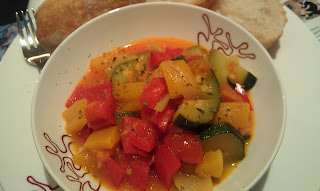 This is a dish that shouldn't take too much work. Get yourself a whacking great chef knife and a dangerously sharp paring knife.

Crush or mince 2-3 cloves garlic. Back the heat down on the onions and toss it in.

With your paring knife, make short order of your two peppers. I cut off the top like I'm preparing to carve a jack-o-lantern, cut two seams down the side and separate. The pulp and seeds are easily disposed this way, and then I can slice the peppers into strips, dice them with five quick lengthwise cuts, and toss 'em in.

Quarter the tomatoes if you're pressed for time, or half them and cut into wedges. I don't fuss over the seeds or the tiny stem part. It all cooks down.

Half the zucchini lengthwise and whack-whack-whacka-whack it with your chef knife. Toss it in. Drizzle the whole pot with EVOO.

Cover and simmer low-to-medium heat, stirring regularly. Sprinkle generously with herbs and garlic salt to taste as you're cooking it. Cook it until the tomatoes have gone all saucy and the veggies are tender. I find it's best if it can then sit and meld off heat for an hour, or even store it in the fridge once it's cooled for the next day. It's best after it's had a little time to rest, but that doesn't mean it's not awesome straight off the stove, too! 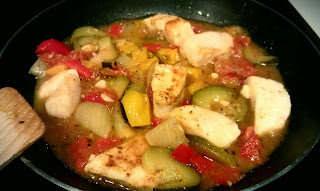 I cook this so often because it's easy, it's inexpensive it's satisfying, it's healthy, and it can be served with so MANY different accompaniments. I'll make a pot of this and serve it the first night with bread, another night with sauteed whitefish (see picture!) and another night as a side with pork. You can toss scallops or tortellini into it. You can use the remaining two tablespoons in an omelet. It's really limitless. This is a staple for me in Singapore. I probably make a pot of it every two weeks. I hope you enjoy it, too!

Ahh, wine. I was going to close with a quick quip about what wine goes best with it, but wine is another story. Wine is expensive here. Really, really expensive. $25USD for a bottle of Barefoot Cab. BAREFOOT. So I hunt the sale racks and get whatever off-name red or white I can find. My favorites with this are French Cellars Merlot or Kangaroo Ridge Shiraz. The wines themselves are big and a little harsh, but paired with the zesty Provençal dish, they soften up and show lovely overtones of rich earth and tart berry.

Yours in the love of good food and wine, wherever you are,
AL
Posted by Amanda Lohiser at 7:04 AM 1 comment: