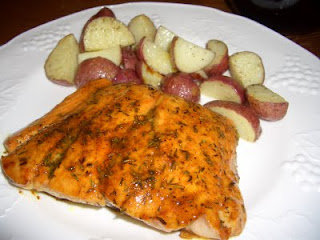 All day today, I craved salmon. It was all I could think about. Not quite sure why. Raw, roasted, broiled, baked, patty, fillet, steak... I didn't care in what form it presented itself, all I knew was that after teaching tonight I was gonna get me some salmon.
So I got this farm-raised Alaskan fillet for just under $4. Given that I would have gladly forked over $20 at that exact moment of desperation, I thought this was a pretty good deal. I hurried home with it and a fresh bottle of olive oil.
Here's what you'll need for tonight's dinner:
~ Salmon (obviously)
~ Olive oil
~ White wine (I used some leftover chard)
~ Side (I broiled up some red creamer potatoes)
For the rub:
~ Salt
~ Brown sugar
~ Curry powder
~ Dried thyme
~ Ginger powder
~ Paprika
Inspired by my love of sushi, I thought I'd bring a little warmth to this salmon by rubbing it down with the flavors of ginger (my favorite thing to eat with salmon sashimi) and paprika for a little wasabi-like heat.
::PAUSE::
In all reality, my paprika is pretty mild, most likely because it's the same bottle of paprika my mom had in her spice cabinet that we used when I was a child, which is probably the same bottle that was in said spice cabinet when she received it as a gift in the 1970s. So this paprika has had some of the kick aged out of it.
::UNPAUSE::
So get your potatoes cooking, then get your rub prepared for the salmon. Into a prep bowl dump some brown sugar, curry, thyme, ginger, paprika and salt. Mix it around a bit. Take the salmon fillet in one hand and a handful of rub in the other and start rubbing it in. Pat the sugar into the crevices a bit, and then let it sit while you do the dishes from this afternoon, check your email, whatever. Let about 5 minutes pass.
Turn the heat on your stick-free skillet and add some olive oil. Next, pour in a bit of white wine. Shake it around so most of the alcohol burns off. Now, add the salmon, rubbed-side down. Don't shake the pan, just let it sit for a few moments. Let the brown sugar caramelize. After you see the salmon is cooked about 2/3 the way up toward the other side, flip it carefully, as the oil and sugar will be about the temperature of molten rock. Let it cook for a few more moments. Put the side on your plate, then serve up the salmon, again, being really careful of the high levels of heat that have been created in the pan.
I served tonight's meal with the leftover Chilean red from the other night. It paired wonderfully with the salmon, offsetting the sweetness of the caramelization, the earthiness of the thyme and the warmth of the curry and paprika.
All in all, a fulfilling meal. Hopefully this will calm the cravings... at least until my next sushi outing!
Yours in the love of good food and wine and the power they can have over us,
AL
~~~~~~~~~~~~~~~~~
The blogger is not an experienced chef. She takes no responsibility for the quality of the meals prepared while following her advice. Use your own judgment regarding cooking times and proper food handling.
Posted by Amanda Lohiser at 11:02 PM No comments: 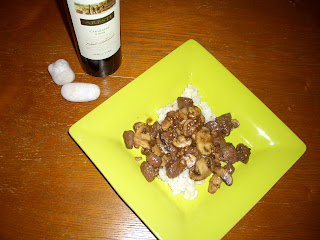 Ever have one of those days? Not a day where anything bad happens, just a hectic, harried, frenzied day during which your brain is active 110% of the time, and you could really use it an additional 15% or so, if it could just kick it up a notch.

~ Olive oil
~ Sirloin steak cut into cubes
~ Mushrooms (I use triple-washed baby bellas. Always have, probably always will.)
~ Green onion (the stalks of mine went bad a few days ago, but I discovered that the bulb is actually quite nice - same mild onion taste with a bit of sweetness)
~ Fresh (or dried) thyme
~ Red wine
~ Slice of Brie (it's for the sauce, so cut off the rind, and, if you're a hard-core brie-fiend like I am, you'll eat the rind as you cook.)
~ Salt/Pepper to taste
~ Apricot jam
~ Balsamic vinegar
~ Lemon juice
~ Crushed garlic (I've decided to give my garlic crusher a rest for a while - it's just so darn messy and during my 12-day recuperation this past month, I observed that lots of the chefs on the Food Network use the bottled crushed garlic. A little milder taste, which, in my opinion, is fine and dandy, and waaaaay less work.)

Make your risotto ahead of time. I stirred in a bit of thyme and in the end, some parmesan. I've never made risotto before and was shocked (almost offended!) to read in the directions that I was expected to stand at the stove and gradually stir simmering water into it for 15 minutes. I decided to cut my losses and slapped a lid onto it after it had actively boiled for about 5 minutes and let it sit while I cooked the main attraction. Guess what? It turned out fine. Sometimes starches just need a little tough love.

Into my stick-free pan I tossed my cubed steak, mushrooms, sliced green onion bulb, thyme, red wine, brie, apricot jam, and small bit of crushed garlic. Over the top of the whole thing I sprinkled salt, pepper and sesame seeds. I then splashed it liberally with red wine, then sparingly with olive oil, balsamic vinegar and lemon juice.

I put the whole thing on the stove for a few minutes until the steak was browned. I removed it and cooked the rest of it down until it was delightfully caramelized. I tossed the parmesan into the risotto and the steak back into the pan for a few minutes. I then found myself sitting at the table in front of this meal. I told you it was a whirl-wind.

I served tonight's dinner with a soft, relaxed Caménère by Aresti vineyards of Chile. I've been a long-time fan of Chilean reds, and this one offered exactly what I love about them - they're full-bodied, but soft as velvet; earthy, fruity, beautifully balanced. It went wonderfully with tonight's meal.

And now, my friends, I shall wash some dishes, review my work for tomorrow, watch a show, perhaps, and go to bed sooooo much more relaxed!

Yours in the love of good food and wine, and the great escapes they offer,
AL

~~~~~~~~~~~~~~~~~
The blogger is not an experienced chef. She takes no responsibility for the quality of the meals prepared while following her advice. Use your own judgment regarding cooking times and proper food handling.
Posted by Amanda Lohiser at 10:15 PM No comments: 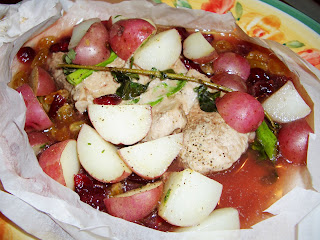 As the third addition to the "en Papillote" files, I offer you pork tenderloins and potatoes. I made this a few nights ago, and just didn't want this to end up wasting away in the File of Meals that Don't Get Blogged. So I thought I'd take five minutes out to write it up. Here's what you'll need for tonight's dinner:
~ Pork tenderloin - cut a few pieces off then save the rest for another meal
~ Small red potatoes
~ Dried fruit (I used golden and regular raisins and cranberries)
~ A random few sloshes of whatever wine is laying around
~ Chives or green onions
~ Fresh (or dried) herbs - I used thyme and marjoram
Preheat your oven. Quarter and boil the potatoes in salted water with some thyme. Meanwhile, dice your pork and place it in one half of your paper heart (See Post #33 for directions on this one!) Salt and pepper the pork to taste. Add a sprig of fresh marjoram. This herb is nearly floral in its aroma - use it sparingly! Add a small bit of green onion or chive. Once the potatoes are forkable, place them over the pork and scatter some dried fruit all around. Fold up your heart and pour in the bit of wine. Cook for 12-15 minutes. All the flavors will meld, and the dried fruit will reconstitute with the juices, making it all sweet and savory at the same time.
I enjoyed this dinner with some leftover Cupcake Vineyard's Chardonnay. It needed something floral and sweet to downplay the serious oakiness of this wine. As it's fermented in stainless with oak chips added for taste, it comes off a bit heavy and not as well-rounded as a chard actually aged in oak barrels. Based on the tasting notes of this wine (warm vanilla, oaky, slightly spicy and well-rounded) I was hoping I had found a lesser expensive version of Cakebread Cellar's Chardonnay (truly the best wine I've ever had in my life - It's what actually started me on this whole path of food and wine appreciation two years ago!) but was disappointed. It still is a nice wine to pair with meals that would normally overpower a weaker white, like this one.
All in all, a good, quick meal to enjoy at the end of a long day!
Yours in the love of good food and wine,
AL
~~~~~~~~~~~~~~~~~
The blogger is not an experienced chef. She takes no responsibility for the quality of the meals prepared while following her advice. Use your own judgment regarding cooking times and proper food handling.
Posted by Amanda Lohiser at 12:53 PM No comments: