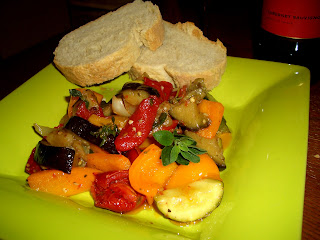 I will confess that around the new year of 2009, I watched a certain computer animated film by Pixar and Disney, and, well, Gusteau's catchphrase of "Anyone can cook" just may have helped push an idea of a cooking blog over the edge from "Hmm, I wonder..." to "That's it - I'm starting a cooking blog!"

This is, of course, the titular meal and a classic in its own right.  Ever since the film, I've been clipping out recipes for this Provençal dish; photos of beautifully arranged veggies are pinned up next to devil-may-care tossed ones.

So last evening, I decided to give it a whirl. 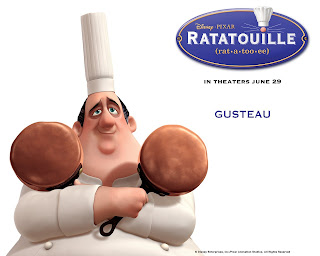 Start a hefty amount of olive oil smokin' in a large skillet.  Chop up the eggplant and toss it around a bit.

I guess I had had a stressful day.  I hadn't realized it until that point, but chopping up that eggplant felt good.  Next came the zucchini.  CHOP CHOP CHOP CHOP-CHOP.  Then the pepper.  CHOP-CHOP!  CHOP-CHOP!  Then the onion.  WHACK-CHOP-CHOP-CHOP-CHOPPA-CHOPPA-CHOP.  With each chop I felt a bit of the day's frustrations leave me.  And a bit more, and a bit more...  This is my new favorite "I've had a bad day" meal.

So - ahem! - toss the chopped eggplant around the oil a bit and add some garlic.  Chop up the zucchini, pepper and onion and add that all in turn.  Open the container of roasted tomatoes (hopefully they come packaged in oil - because the oil is delicious!) and it all in.  Add some fresh herbs at this point.  If it starts sticking, add a bit of water to create some steam.

Let the whole deal simmer, covered, until the veggies are tender.  I served this with a crusty loaf of pain de compagne and it was a perfect textural partner for this savory, filling meal.  I paired it with a cabernet sauvignon by French Maid (it seemed fitting!) and it was wonderfully fruity, balanced and bright.

All in all, a successful meal!
Yours in the love of good food, wine, and the outlets they bring us (both creative and physical!),
AL

~~~~~~~~~~~~~~~~~
The blogger is not an experienced chef. She takes no responsibility for the quality of the meals prepared while following her advice. Use your own judgment regarding cooking times and proper food handling.
Posted by Amanda Lohiser at 6:39 PM